20 Jan The car in Ancient Greece 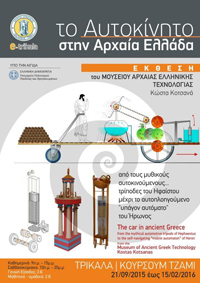 W as there a car in ancient Greece and particularly with automatic navigation (i.e. without a driver)? When and where?

How was it programmed? Which were the various sources of energy for its automatic motion?

What type of gearbox did it have in order to increase or decrease its torque and velocity?

How did it automatically turn left, right and how was it reversing? On what kind of road did it move?

Had there been incorporated any indicating measurement instruments (e.g. mileometers) in wheeled vehicles?

Had there been invented joints of Cardan type and wheels of Caster type? (1800 years before their “inventors”)

Was there steam mobility and jet propulsion in ancient Greece?

Had the belt, gear and chain drive been used for the transmission of movement? Had kinematic mechanisms been applied for the conversion of the rotating motion to reciprocating motion and vice versa?

Had pistons and cylinders, intake and exhaust valves, springs, sprockets, toothed wheels and racks, screws and swivel-nuts been used?

Is it possible for a vehicle to freely move upwards on a special inclined plane?

This exhibition responds positively to all the aforementioned questions (using functional exhibits, detailed drawings and thorough information) with the validity and reliability of the Kostas Kotsanas Museum of Ancient Greek Technology, operating in Katakolo and Ancient Olympia (Archimedes Museum).

The course of the western technological culture was not an ascending linear evolution, as we usually know, but a rapid development and culmination during the 3rd century B.C., a decline and loss of this technology during the following centuries and a gradual recovery, with the 14th century A.D. balancing the cutting edge technology at the beginning of the 2nd century B.C. The progress of our current technology would thus be doubtful without the costless “recovery” from the Western culture (after 1500 years of maturation) of this admirable forgotten ancient Greek technology. The exploration of this era where the cutting edge technology was not guaranteed clearly proves how much more (than we think) the modern Western Technological Culture owes to Greeks.