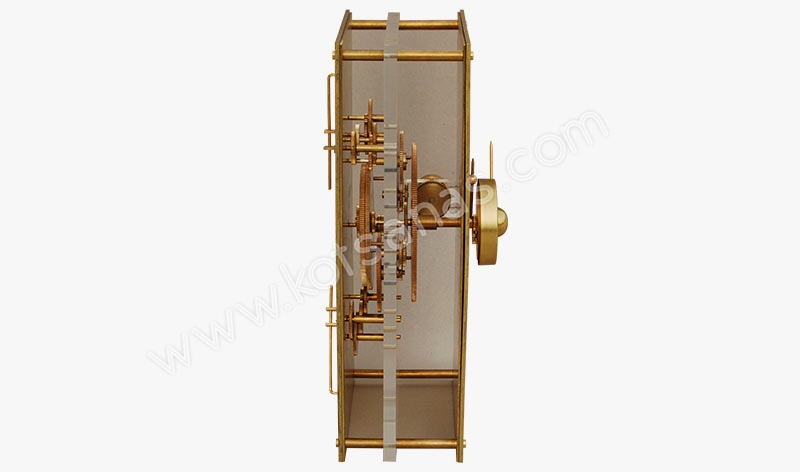 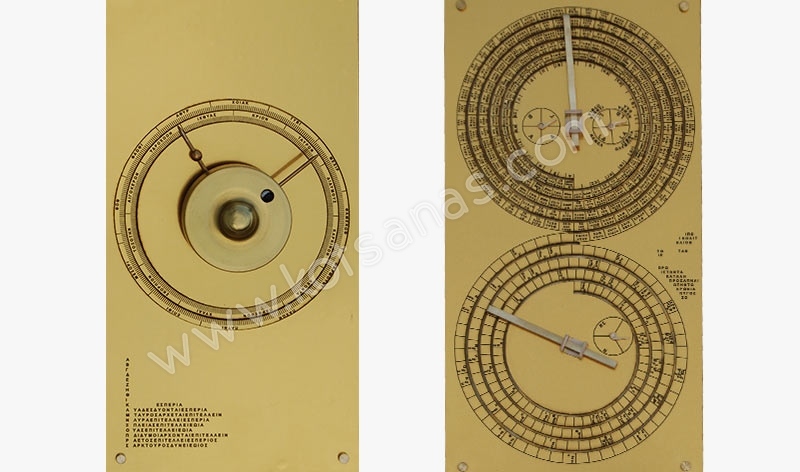 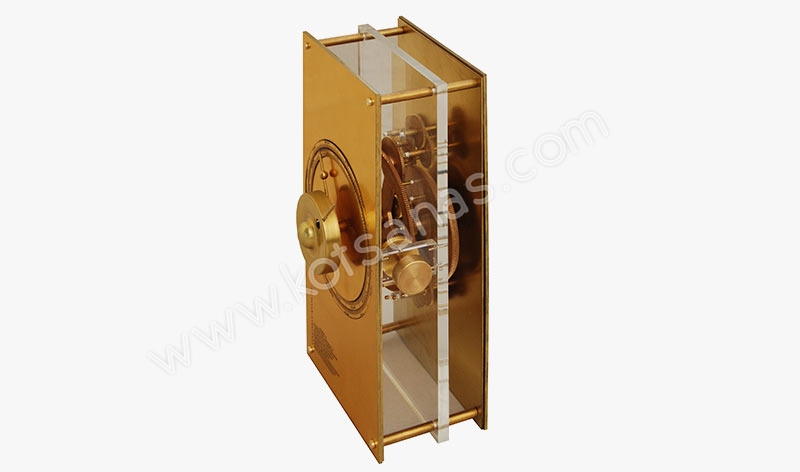 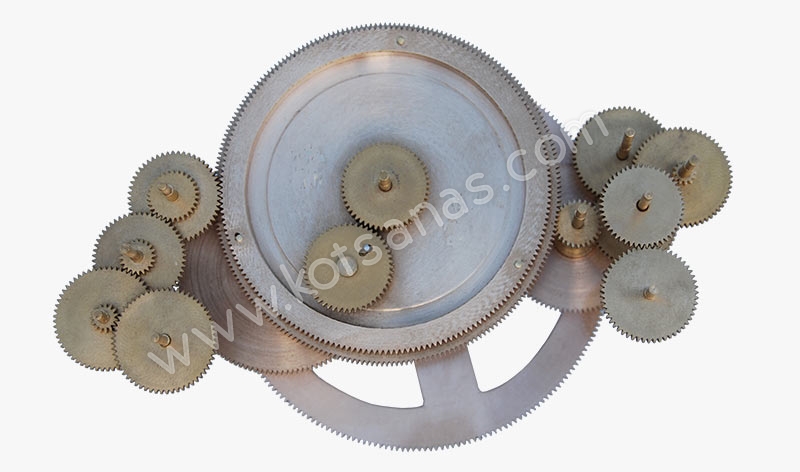 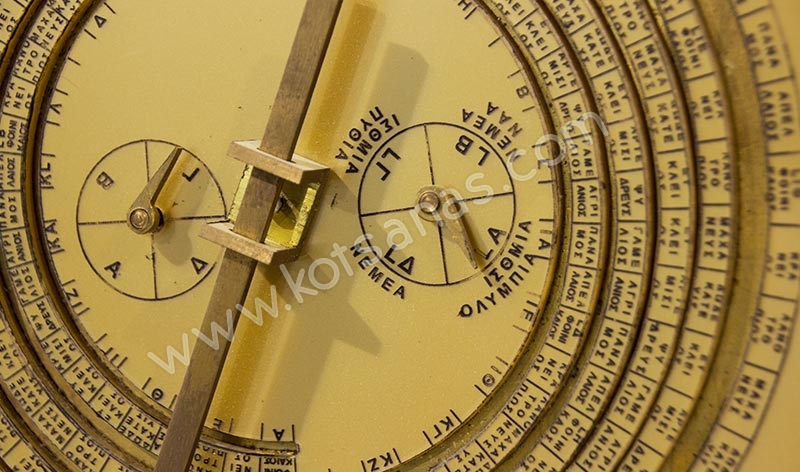 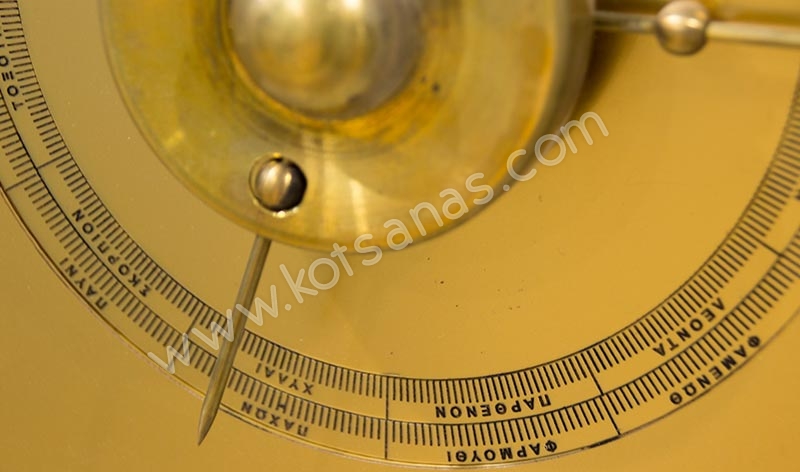 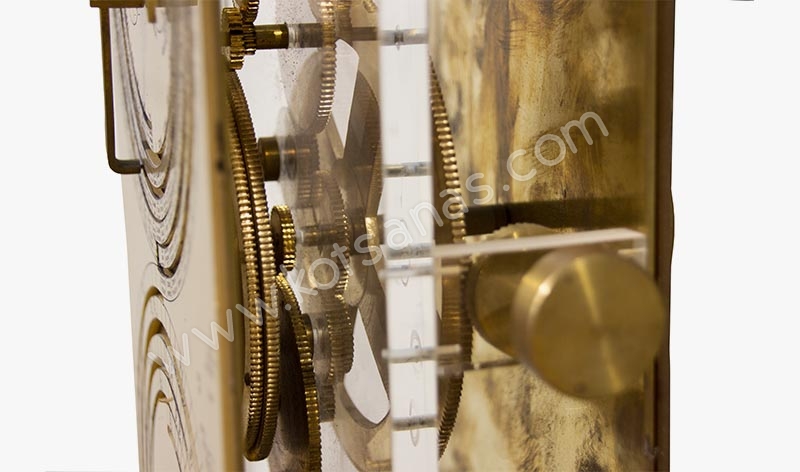 The Antikythera calculating mechanism (2nd c. B.C.)
A…laptop from the past

It is the first calculating machine in history. It was used to determine and forecast important astronomical and calendar events. Its remains were found accidentally by sponge divers in 1900 in the eminent shipwreck off the island of Antikythera. Its manufacture dates from around 120 B.C. and it is probably the product of a Rhodian or an Asia Minor workshop, which developed the tradition of Archimedes’ “Sphere-Making”, with its direct inspirators being Hipparchus or Posidonius. It consisted of indicators, scales and at least thirty-five cooperating gear wheels that were moved by a handle. In the centre of the left plate we can distinguish two graded circles, corresponding to the Egyptian and the Greek zodiac calendars, the sun, and the moon with its exact position and its phase. By means of a pair of concentric gear wheels and of another pair, eccentrically placed, (of 50 teeth each) with a special dowel-slot method of transmission, the apparent speed of the moon with its acceleration during the perigee and its deceleration during its apogee was simulated. At the upper part of the right plate we can distinguish the spiral cycle of Meton that consisted of 235 synodic (lunar) months –based on the Corinthian calendar– of a total duration of 19 years. Within the metonic spiral, in its left part we can distinguish Callippus cycle that corresponded to a time duration equal to four metonic cycles, that means 76 years. It was used for the absolute correspondence of the lunar to the solar year. At the right part of the spiral we distinguish the cycle of the Olympic Games. It was used to determine when to celebrate the most important athletic games of antiquity (Olympia, Pythia, Isthmia, Nemea and Naia).
At the lower part of the right plate we distinguish the spiral cycle of the periodic time (Saros cycle) that was consisted of 223 synodic months of total duration of 18 years. In the internal part of the cycle we distinguish the Exeligmos cycle that corresponded in time duration equal to three Saros cycles, that means 54 years.
With the rotation of the handle and, consequently, the choice of a date on the front scale of 365 days, the remainder indicators give us all available astronomical information thereon (e.g. position and phase of the moon, matching of solar-lunar calendar, etc.). Reversely, if the operator of the mechanism brings the indicator to some particular astronomical or calendar events (e.g. an eclipse of the moon or a performance of the Olympic Games), he can see the date (even the hour) that this will happen in the future or happened in the past. Derek de Solla Price and Michael Wright were the most important researchers of this mechanism. This reconstruction reflects the constructional opinion of the creator of the Museum of Ancient Greek Technology, and was based on the new data from the International Study Team of the Antikythera Mechanism.